All information about the measures and restrictions due to COVID-19 can be found here.

The municipality of Grächen’s local museum is located in the old former parish hall. Exhibits about the culture and history, the life and work of Grächen’s most famous resident, Thomas Platter, old photographs and books as well as many more interesting exhibition pieces are shown here. 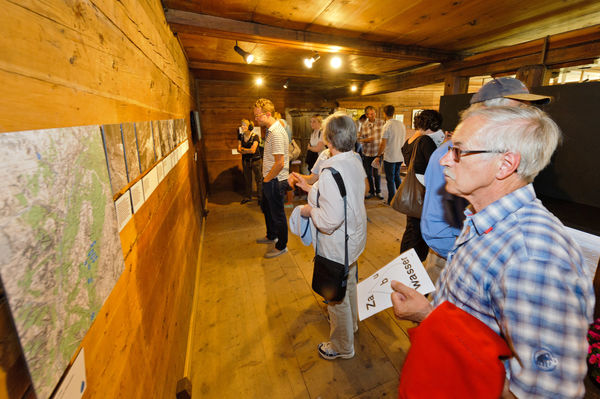 The Magical Water exhibition on Grächen’s irrigation channels
With its new exhibition the Grächen local museum is inviting you to learn about the unique Grächen irrigation channels. The traditional museum is venturing a new look at this ancient cultural asset. A Basel secondary school class was commissioned with developing an exhibition concept that puts the students’ candid opinion and impressions in the spotlight. The result is a variety-packed “indoors and outdoors” exhibition programme, which based on the class’ guiding principle deals with the topic just as entertainingly as informatively. Interactive exhibits encourage all ages to look, listen and play. Be inspired and set off on a voyage of discovery into Grächen’s nature.
“With the Magical Water exhibition I am able to pursue my vision of making the beauty and fascination of Grächen’s irrigation channels and the dedication of the people of Grächen to this cultural asset well-known way beyond Valais. While developing the exhibition concept I was able to put extremely interested young people in Basel in touch with experts on Grächen’s cultural asset. Seeing what inspiring power this exchange had also re-inspired me for the irrigation channels and the traditions of water.
Grächen is situated in one of the driest regions in the alpine region. A reliable irrigation system was built here 700 years ago and constantly developed further in order to be able to survive here. The irrigation channels that have been preserved to date, also called “Suonen” in other parts of Upper Valais, are testament to an old cultural technology that channelled the magical water from the Ried Glacier onto farmers’ fields and pastures for many generations. Today the open irrigation channels invite you to admire them, play and walk along them.

Thomas Platter – the humanist from the mountains
Born in Grächen in 1499 – died in Basel in 1582. Humanist and scholar, Rector of the “auf Burg” Latin school in Basel. Printer and author of a fascinating biography. Thomas Platter can undoubtedly be called Grächen most famous son. Born at the end of the 15th century as a farmer’s child in Weiler Blattu near Niedergrächen, “Thomlin”, as he was lovingly called by his parents, tended goats. Nobody could have predicted the career that he was to enjoy back then. Given away at the age of then as a hired-out work child, he got to know almost all the quagmires of this time. He wandered through Saxony, Silesia and Bavaria as a travelling scholar. On these journeys he begged for the bread and butter for this older colleagues, the “bacchants”. During this time he had hardly any opportunity to acquire any knowledge.
He only started to study Hebrew, Greek and Latin at the age of twenty when he settled in Zurich. Not only did he become a scholar but he also familiarised himself with the ideas of humanism and reformation. As unsettled as he was, he later moved to Basel where he initially earned his money as a rope maker apprentice. Later on he held lectures there in ancient languages, became Rector of the “auf Burg” Latin school and managed it for almost 40 years, often with strict authority. He also worked as a printer and publisher alongside this. He also acquired a large estate, the Gundeldinger Schlösschen, and farmed it. During times of the plague he always withdrew there. Thomas Platter became famous though due to his brilliant biography, which he wrote just before his death. In this work, which is still read by many today, he not only wrote about the traditions and customs of his time. But he also documented the political and social upheavals, the plague epidemics and reformation wars which he had taken part in himself and therefore left us with an extremely valuable record of that time. In his second marriage, he and the reverend’s daughter Esther Gross were blessed with six children, one of them, Felix Platter, became a city doctor in Basel and famous anatomist. Felix Platter published a new anatomy text book in 1583. The second largest hospital in the City of Basel, the Felix Platter Spital, was named after him.