The Alpe Äbnet is located above Grächen where the cattle are put out to graze in the summer for a small fee. The moving of the cattle up to or down from the mountain pasture is celebrated on the Alpe Äbnet at the start and end of summer. 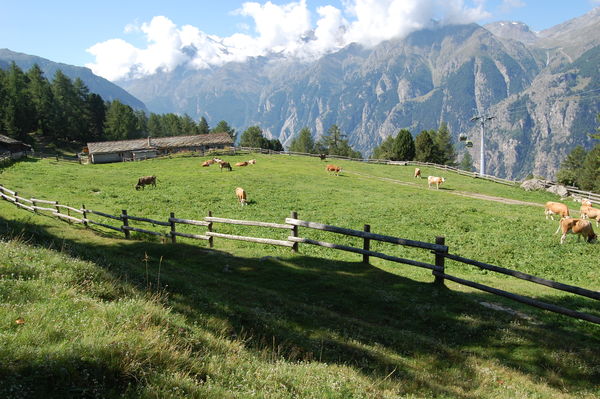 Alpine dairy and cheese production
The cows eat the extremely healthy mountain grass thanks to environmentally-friendly farming and are milked in a modern milking parlour. The milk is put into the copper vats straight away and immediately made into cheese and other dairy products The dairy farmer likes being watched while working. Straight after milking, the milk is put into the vat and curdled with the rennet. The curdled milk is then heated up and stirred with the cheese breaker. Then the cheese is removed using a cheese cloth and placed in the cheese mould where a lid is placed on top and weighed down on the cheese bench with a rock so that the curd drains off. Later on the cheese is turned and salted two or three times in the cheese cloth with the mould and finally taken to the cheese cellar where it is turned and salted every day for another two to three weeks. Once the cheese is in the cellar it is weighed and the weight is marked on the cheese’s mould side. The fresh weight is important when the cheese is sold in the autumn. The yellowish green liquid that is left in the vat is called “cheese milk” (whey). Four litres are put to the side every day for the alpine comrades who purchase the whey. This is highly valued as a thirst-quenching food. The whey cheese milk left in the vat has lactic acid whey added and is brought to the boil. Then the curd is separated off shaped into balls in cloths and hung up to drain. The residue in the cheese vat, once the curd has been removed, is the “whey”, a light yellowish green liquid where the nutritional value is no longer very high. It is used as pig feed.

Herens
The Herens breed, which undoubtedly originates from cattle stocks which originally populated the Alpine Arc, has been kept in Valais since time began. In terms of stock, the Herens are one of the smallest recognised cow breeds in Switzerland. Herens are practically only kept in Valais and the Aosta Valley. Compared to “high-performing dairy cows” the Herens are distinguished by their stout, muscular and low-standing “stature”. The colour of their fur ranges for reddish to brown to brownish black and deep black. The breed was only able to hold its grounds until present day thanks to the “horn”, its natural fighting spirit. The mountain breed has been criticised time and time again due to its poor productivity, especially in the 19th century. Today though the Herens are totally in keeping with the trend of modern agricultural policy thanks to extensive husbandry.
Animal welfare is really important to breeders of Herens. Which is why the animals are only kept in cowsheds during the short winter months. The animals spend the autumn and spring on mown pastures or poor grasslands close to the cowsheds and in the foothills of the Alps. During the rest of the time the Herens cows are put out to pasture on the High Alps in the summer without exception where the tasty grass and highly aromatic herbs are right at the top of their menu. In the winter the majority of breeders feed their animals with alpine hay from their own meadow.

The mountain pasture ascent and descent
The registered cow is driven to the collection point in the early morning. At about 9.00 a.m. the exciting wresting fights start in the “Ringchrommu”, above the lake in the middle of the beautiful Grächen forest. The animals from different cowsheds are strangers to each other and initially stand hostilely opposite each other. This cow wrestling is called “Stechen” and it can last several hours. Afterwards the whole herd is driven to the “Äbnet” alp below. There the day is rounded off by talking shop over a glass of wine and a raclette. The winner of the fights is decorated on the alp on the last day and led back to the village together with the dairy cow.

Cow wrestling fights
The Herens breed cows have a lively and fighting spirit. Every spring they passionately fight for leadership horn against horn at the cattle drive. The cows are not trained for this. This confrontation is natural. The strongest among them, the “Queen”, will lead the herd the entire summer.
The “cow wrestling fights” event came about due to this disposition and attracts lots of breeders and spectators. The cows are led onto a relatively grassy terrain in groups based on their age and weight. There they select their opponents themselves and stop the fight as soon as the defeated cow turns away.
In the evening the cow that was never defeated is crowned the Queen. She will lead the herd during the mountain pasture descent until another one dethrones her.